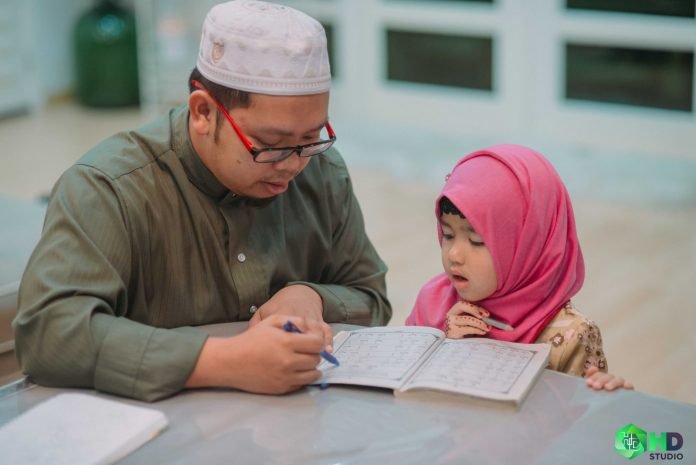 Pacing down the steps of Sultan Sharif Ali Islamic University’s canteen, it appeared to be a weekday morning like any other.

For Hj Loqman Al-Hakim Hj Hamdan however, this was a walk he would not forget. The 24-year-old’s usual gregariousness was absent, overwhelmed by an encircling wave of anguish.

Cancer had claimed the life of Loqman’s grandmother just a few days prior. The weight of his emotions growing, his knees began to buckle as he crouched down. His shoulders rolled inwards; elbows pressing into his legs as tears began to stream down his face.

“I thought I could hold it in,” said Loqman, who had tried to deal with her death stoically. “But the grief was too much.”

Two years have passed. Today, Loqman has reinvented himself from university student to entrepreneur, with a novel business that connects and sends Al-Quran teachers to customers’ homes.

The 26-year-old’s biggest draw stems from his idea’s potential to scale rapidly online by leveraging on a uniquely local supply base.

“Bruneian’s have amongst the best command of English in the region,” says Loqman. “And without doubt, the Islamic institutions here produce a steady flow of graduates knowledgeable in the Al-Quran every year.”

It’s just the right combination needed for Al-Huffaz to tap into the global market. The results could be game changing; there are 1.7 billion Muslims across the globe – and growing.

Loqman is readying Al-Huffaz for the next step; meeting with developers to set up a video conferencing platform; joining job fairs to look for teachers and making it every week to Darussalam Enterprise’s start-up boot camp – where he always makes sure to take a seat at the very front.

“To make my life count,” Loqman puts it simply, when asked for the reason why Al-Huffaz came to be. “For my country, for those I have lost and for Allah.”

2014 ended on a sombre note for Loqman. But his grandmother’s death, however painful, was only the beginning of a series of painful experiences that sent Loqman into a downward spiral.

Less than 12 months after, he would also lose his uncle, who he had spent his childhood with. In his final weeks, Loqman remained by his side.

His daily commute to university switched from his home to a fold up chair in the hospital, as he fed, cleaned and prayed for his uncle who suffered from a condition that eventually paralyzed him as he slowly lost his motor control.

“I needed to be strong,” he said, as his uncle’s admission came at a critical time during his final year in university. “But after he passed, I was devastated. It was all I could think about.”

Loqman ended up submitting his final dissertation well below the word count. It would not be enough. He was told soon after that he had failed and would not be graduating that year.

“2015 was supposed to be the year I graduated, got married, got a job and started a family,” he said. “And here I was failing. It was the last thing my grandmother and uncle would have wanted.”

Loqman was trapped in the crucible; and it had to be his faith that would guide him out. “All I had gone through, all that I had failed to do. I had to believe that God was still there for me.”

He told his fiancée, that he was to marry right before his graduation, that he would repeat his final year. She was shocked but remained firmly behind him. Loqman re-did his dissertation and passed.

While waiting to formally graduate, he applied for 12 jobs – from banks to food delivery – but his phone never rang for an interview. “I was teaching Al-Quran to one family I knew personally at the time,” he said. “It helped provide a small income to get by. But I didn’t think much of it since I was from UNISSA. I knew there were many Bruneians who could help teach the Al-Quran.”

Loqman was right in principle – there were many with the ability to teach. In practice however, there was no facilitator outside traditional settings like mosques that matched teachers with students.

One day, as Loqman was chatting with his friends, they brought up that Bruneians were talking about a shortage of private Al-Quran teachers. They were looking, but could not find any.

“When I heard of the shortage; I was ready to teach those whoever was interested. But should there eventually be hundreds of customers; how would I cater to all of them?” he said. “I realized the better option was to have a platform to bring the customers and teachers together. Like Uber, but to learn Al-Quran.”

Loqman registered Al-Huffaz in April, was certified by Brunei’s Islamic Religious Council and got to work. With a pool of 30 teachers, Al-Huffaz now teaches 50 separate classes a week, each typically lasting an hour.

He has caught the eye of investors, who are looking to partner with him to take his services overseas through an online platform. Loqman and his team spent last week sifting through more than a hundred CVs – all applying to be a part of his platform.

“We plan to double the amount of teachers we have to have the supply needed to push things to the next level,” said Loqman. “These are Masters’ graduates, some have even memorized the whole Al-Quran. It was an honour to even be interviewing them.”

The appeal is simple. For just six hours of work as week, teachers can earn $300 a month. “For those free to teach more and are willing to help build demand, the possibility is much higher,” he added.

I sit in one of Loqman’s classes in Anggerek on a Monday evening. This one is slightly different – he’s been teaching here since 2014.  It’s his longest serving customer, who first took notice of his talent during his student attachment at the Civil Service Institute.

The 26-year-old is clear in his delivery, warm in his approach and pays close attention to the nuances of their recital.

“Whenever I am faced with a challenge; I remember that the strength I need to survive is in the Al-Quran,” he tells me after the class is complete. “And believe it as it is said – Allah will not burden a soul beyond it can bear.”

Trading a Nokia 3310 for a new car and business

The housewife behind Layong’s salted eggs