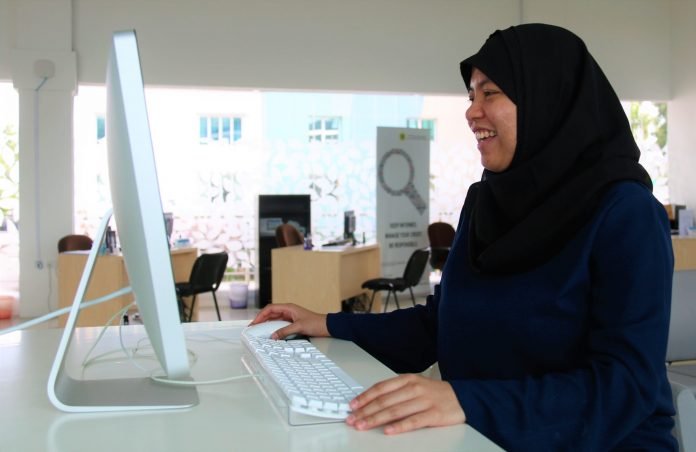 In the summer of 2014, Nur Khairunnisa Md Metussin was in Newcastle, UK waiting to graduate with a degree in Ethical Hacking for Computer Security for Northumbia University.

Spirits were high, as her course mates discussed what job placements and offers they would be taking up soon as graduation celebrations were over.

Nisa, 27 at the time, had every reason to be just as optimistic – she was one of the outstanding performers in her class – amongst a select few who would be graduating with first class honours.

When she returned back to Brunei, with the glow of graduation still intact, Nisa began sending out CVs, but as weeks turned to months, no employer was willing to take her on.

“I must have applied over 50 vacancies,” said Nisa, now 30. “It was hard – seeing all my course mates progressing, moving up with their careers. And here I was, still stuck.”

The months became years, and in 2016, Nisa decided she couldn’t sit around any longer. It was time to turn the tables.

“I saw a growing trend of more and more Bruneians selling online,” said Nisa. “All sorts of items, from fashion, to food, to electronics.”

In Brunei however, it’s become almost common language to refer to “selling online” as referring to buying from a seller advertising on social media platforms like Facebook and Instagram, who you pay in person when you pick-up or receive your item. Actually paying online, or buying from an online marketplace that’s based out of Brunei, is much less common.

“The demand for Bruneians to find out and learn about new things online, is huge,” said Nisa. “And how much bigger could it be, if someone were to set up an online marketplace that could actually process payments?”

With internet use and mobile ownership in Brunei amongst the highest in the region, Nisa isn’t the first to try out an online marketplace in the Sultanate to address the gap between sellers and customers.

Several have sprung up in recent years but none have been able to follow through after an initial period of hype and the market remains wide open to whoever is able to provide a winning solution.

“This was my opportunity,” Nisa said to herself. “If I couldn’t find a job – I’m going to create one.”

She drew up a plan, connected back with a few friends from university, and began to build her platform towards the middle of 2016.

The online marketplace – which debut last Monday – is simply known as storkitani, or translated as our store. “At storkitani, we do the A to Z for you,” she propositions to vendors. “We’ll do inventory; have models outfit your clothes, hire professionals to take pictures of your products and handle delivery.”

The store has opened with six local vendors selling 180 different clothing items, with more on the way.

“Soon we’ll have more than just clothes,” said Nisa, who is currently charging vendors a flat monthly rental with a small cut of sales. “The concept of storkitani, is that it’s a store for everyone.”

True to a startup that’s just gotten off the ground, Nisa’s home has now turned into a makeshift combo of warehouse, studio and office.

While the 30-year-old manages the technical operations of the website, she has one other staff, and is possibly looking at getting another two under the government sponsored apprenticeship programme i-Ready, to handle storkitani’s marketing and promotions.

“Eventually we want to be able to sell to customers outside Brunei,” says Nisa. “There are issues with the cost of shipping, which is high, but we’ll find a way.”

It’s perhaps too early or even presumptuous to make predictions about storkitani’s success. But what’s certain is that Nisa’s turnaround isn’t a tale of a chance, luck or good fortune, but a conscious and deliberate act to carve out a new path, when there wasn’t one before.

“It had become very discouraging,” she said of her job search.“To be rejected, or to not even get called for an interview, time after time again. I would sit around, worrying was it something I said or something I did wrong. And then one day I decided – I wasn’t willing to wait anymore.”

Contact Storkitani at +6738656898 or through email at info@storkitani.com. You can also stay up to date with their latest uploads and offers by following @storkitani on Instagram and Facebook.

Repathlete putting their stamp on locally made workout apparel